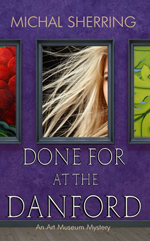 DONE FOR AT THE DANFORD on Amazon

ROBIN GRINLING, Curator, newly hired at the Danford Museum in Edgell, Massachusetts, an art historian specializing in the Modern period, 1900 to 1940. When the museum receives a collection of unidentified paintings, Robin applies her skills and training to discover the mysterious artists. But to her alarm, the better she does her job, discovering their long-hidden names, the more people in this small, dying mill town turn against her.

CHESTER VINCENT ARTHUR, M.A., Director, called Chet, about 30, hired by the museum's board just months earlier to manage the museum. As his duties lean heavily toward fund-raising, he hired Robin to handle the curatorial aspects of the Danford's 80-odd-year-old collection. Chet aspires to make his name in Edgell and move on to bigger and richer museums. Having people dying in his museum is a serious professional drawback.

SAMPSON LANDAUER, moody art dealer, owns the Landauer Gallery in Boston, exhibits living artists in his gallery and at the Danford. Not given to sharing what he knows.

KELLY POWLER, Danford Museum Technician. Like all museum technicians, he is indispensable to the Curator assisting in all aspects of installing exhibitions. Hired by the board, Kelly has been at the Danford years longer than Chet or Robin. Also moonlights for other clients.

BILLINGS CHASE, nicknamed Slinky, heiress to the Black fortune including a group of unidentified still life paintings. Tall blonde, about Robin's age, debutante, failed art appreciation in finishing school. Eager to learn anything Robin can teach her about art and the work of a curator.

HENRY HOWE WHITCOMB FISKE, elderly local millionaire from old Edgell mill-owning family and ferocious friend and defender of the late Mr. and Mrs. Black. He stoutly resists Chet's efforts to coax him on to his museum board.

WHITCOMB HOWE, distant relation to Henry Fiske and making the most of it. Blond, handsome, age 51, a perennial amateur scholar

DORELLA CHASE, Slinky's mother, late 50s or so, widow of the connection-by-marriage who linked Slinky to the fortune

ELDREDGE LUX, one of the mysterious artists Robin must identify, who painted still lifes in Slinky's collection

LEIF HANSEN, artist shown in the Landauer Gallery, who Robin hopes to write about

BRITT CORBETT, local, over 60 but beautiful, Marxist art critic, leader of a group of hippies who protest the museum as "irrelevant"

Other characters will be added, one by one. Check back now and then.